The ‘Travels With Charley’ Timeline — Day 9 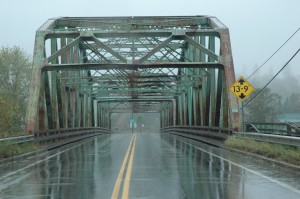 Steinbeck crossed the “iron bridge” over the Connecticut River twice — going east to Maine and less than a week later going west to Chicago.

On Saturday morning Steinbeck leaves the Whip ‘o Will campground in Lancaster, N.H., crossing the iron bridge over the Connecticut River into Vermont on U.S. Highway 2.  He enters New York from northwest Vermont at Rouses Point and heads south on U.S. Route 11 to New York Route 104, where he turns toward Niagara Falls.

Bound for Chicago and a planned rendezvous with his wife Elaine, he wrote a letter to her late that night saying he had pulled into “this trailer park.” He doesn’t say what state he is in, but it most likely was somewhere along U.S. 11 in Upstate New York.

Steinbeck writes in “Charley” that on his last day in New England, which would have been Sunday, Oct. 2, he attended services at a white wooden John Knox (Methodist) church in Vermont and heard a rousing sermon.

He doesn’t name the town or church and today no one in the area seems to be able to figure out which church it was — or if his “mystery church” really existed.

New England is crawling with “blazing white” wood churches like “The White Church,”  which is in the village of Deerfield, Mass., where Steinbeck’s son John went to the Eaglebrook School.

The “White Church” in Deerfield, Mass, might have inspired the fictional fire-and-brimestone church service he described in “Travels With Charley.”

Eaglebrook students walked to the church on Sundays and Steinbeck probably attended services there the previous Sunday, Sept. 25, 1960, when he stopped in Deerfield to visit his son. Was that the white church? Probably not. Was it an inspiration? Maybe.

My sprint through changeless beautiful New England left me with a religious mystery – where was that “blindingly” white wood church Steinbeck said he attended in Vermont? In the book he describes getting dolled up and going to a church service on his last day in New England. He called it a “John Knox church” and enthused about the minister’s fire-and-brimstone, God-is-going-to-kick-your-ass sermon.

The scolding made Steinbeck feel bad and guilty inside, like a first-rate sinner whose sins were his own fault, not, as the “psychiatric priesthood” of the day would have it, “accidents that are set in motion by forces beyond our control.” He was so “revived in spirit” by this booster shot of God-fearing guilt, he said, that he put $5 in the plate ($35 in 2010 money) and shook hands with the minister warmly at the church door.

Until I woke up and smelled the fiction in “Travels With Charley,” I thought it’d be a breeze finding that white church. I even hoped to dig up the scary sermon Steinbeck heard …. I assumed “John Knox” was Steinbeck’s indirect way of saying it was a Presbyterian church. So before I ever set tire in New England, and long before I realized every other one of its 1.3 million lovely old churches was white and made of wood, I called Presbyterian presbyteries in Vermont and northern New York to ask if they could help. The good Presbyterians of New England tried like hell but failed me.

After my tour of New England, his mystery church remained a mystery. I still didn’t have any idea where it was – or if it ever was. That sly dog Steinbeck, I had come to realize, could have heard that sermon in a church anywhere and at anytime in his life. The only Sunday he could have attended a church service in Vermont was Oct. 2, 1960. But on that day he was already in Upstate New York motoring toward Niagara Falls and Chicago.