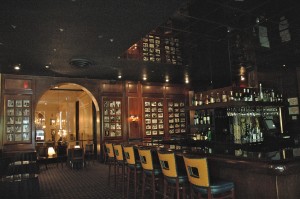 The Ambassador East Hotel’s famed Pump Room was done up in dark wood and leather and plastered to the ceiling with glossy photos of the celebrities who stayed there.

Steinbeck traveled fast from Buffalo to Chicago, a distance of about 550 miles. He left Buffalo on Monday morning and arrived at Chicago’s famous Ambassador East Hotel sometime Tuesday or Wednesday. His wife Elaine jetted out from New York.

Steinbeck describes this leg of his road trip in “Charley,” but given his haste to see his wife, his account is not plausible. He writes that he camped Monday night on private land by a lake along U.S. 20 in northern Ohio or southern Michigan and went fishing the next morning with the young man who had let him stay there. He writes that at noon (on what would have been Tuesday, Oct. 4), “growing increasingly anxious” to meet Elaine, he climbed on the Indiana Toll Road and drove almost all night, arriving at the Ambassador East early the next morning before his room was ready.

No one will ever know what Steinbeck really did between Buffalo and Chicago or what he made up. He could have covered the entire distance in one hellish day/night drive, or rented a motel room somewhere or, least likely of all, really camped overnight by a private lake and gone fishing. Steinbeck and his wife were together in Chicago until Monday, Oct. 10, and stayed at least one night with Adlai Stevenson at his farm in nearby Libertyville, Ill. (Day 1 of Steinbeck’s trip.) 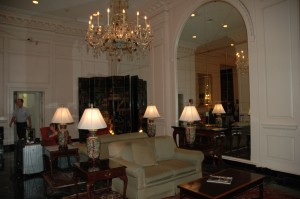 The lobby of the Ambassador East, as it looked in October 2010.

In my quixotic travels with Charley about America I paused five times, in Chicago, in Seattle, in California and twice in Texas. Then I saw and felt beloved people who knew me as I knew them. It would be quite easy to recount every moment of these steps but it would be out of drawing with the rest. A book has to be one thing, just as a poem does – or a chair or a table.

– Cut from first draft of “Travels With Charley”

Sleeping over at Adlai’s Farm

Steinbeck and Adlai Stevenson were more than contemporaries and pen pals. They had several interests in common – liberal/New Deal politics, agriculture, dogs and the legend of King Arthur and the Round Table. Politically, Steinbeck was a Stevenson Man, 110 percent. He helped the former Illinois governor during the 1950s with some speeches and desperately wanted him to become the president in ’52 and ’56 and to win the Democrat nomination again in 1960. He was still pulling for Stevenson long after it was clear that his days as the Democrats’ standard-bearer were over.

Adlai Stevenson, former Illinois governor and Democratic presidential candidate in 1952 and 1956, was Steinbeck’s political hero, friend and pen pal. Stevenson lived on a 70 acre farm outside Chicago in Libertyville. Steinbeck and his wife Elaine spent a night their during his layover in Chicago.

Stevenson’s white, squared-off house at “The Farm” was simple, practical and smartly designed, with airy rooms, huge windows, a wild Art Deco bathroom and a long back deck looking out at the lawn and blazing oak trees that stretched to the Des Plaines River. The house (owned by the Lake County Forest Preserve), had been restored for tours in 2008 and was used for meetings but still needed several rooms of furniture. Only Stevenson’s study – the most important room in the house, said my guide Nicole Stocker – was completely furnished. It had his old desk, his books and his address book – which happened to be opened to “S.” Steinbeck’s name and Sag Harbor phone number were there.

In 1960 Stevenson’s place was still a working farm. He grew corn and soybeans, and had horses, sheep and a pack of Dalmatians, all named after characters from King Arthur’s Court. He, like Steinbeck, lived relatively frugally for a wealthy man, but Nicole said a housekeeper and a caretaker were on the premises. 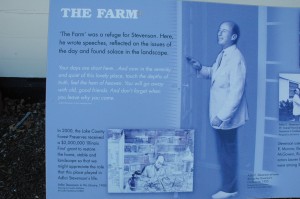 One of Stevenson’s near neighbors was Marshall Field, who owned a little department store in Chicago. Many historic figures of the era came to talk politics with Adlai in his ample living room – from Senator Robert “Mr. Republican” Taft of Ohio to a young, ambitious rogue with the initials JFK. Nicole said the three Steinbecks probably slept in the guest suite, where Eleanor Roosevelt would crash whenever she dropped by.

Steinbeck says nothing in “Travels With Charley” or his road letters about his visit to Stevenson’s farm, which is 35 miles north of downtown Chicago. Biographer Jackson Benson mentions Steinbeck’s visit in “John Steinbeck, Writer.” And a Steinbeck letter to Stevenson that I read at Princeton alludes to their walk together in Stevenson’s “blazing” woods in the fall of 1960. Exactly when the Steinbeck family stayed in Libertyville is not known and doesn’t matter.