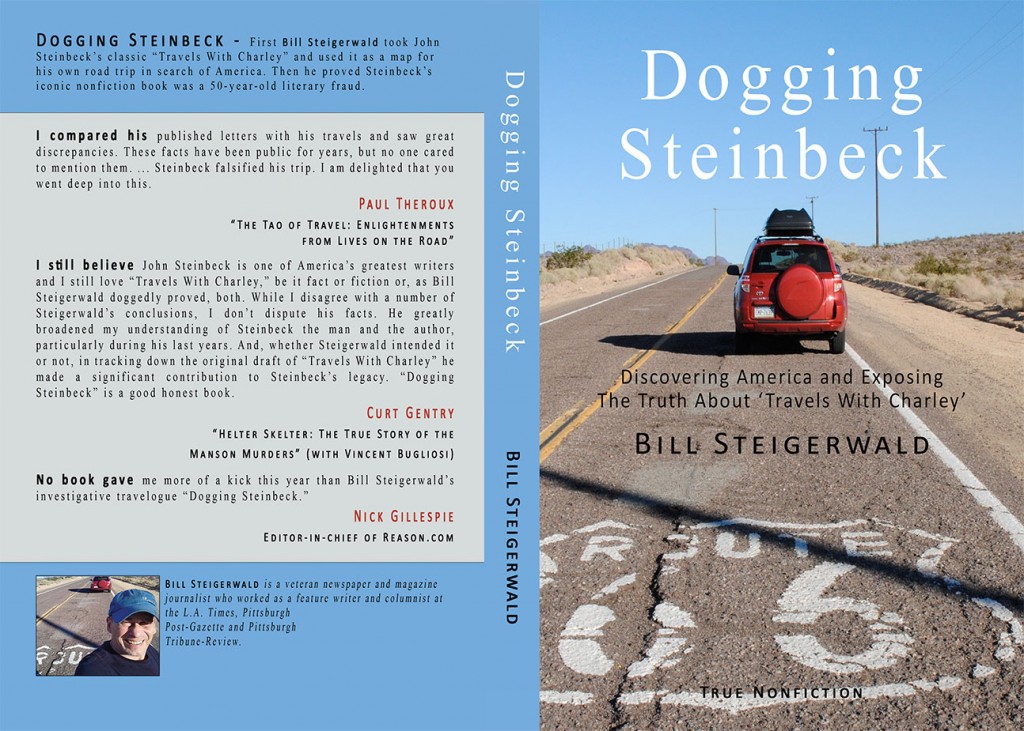 First journalist Bill Steigerwald took John Steinbeck’s classic “Travels With Charley” and used it as a map for his own cross-country road trip in search of America. Then he proved Steinbeck’s iconic nonfiction book was a 50-year-old literary fraud. A true story about the triumph of truth.

“Steinbeck falsified his trip. I am delighted that you went deep into this.” — Paul Theroux, Author of “The Tao of Travel: Enlightenments from Lives on the Road”

Bill Steigerwald had a brilliant plan for showing how much America has changed in the last half century — or so he thought. He’d simply retrace the 10,000-mile route John Steinbeck took around the USA in 1960 for his beloved bestseller “Travels With Charley.” Then he’d compare the America he saw with the country Steinbeck described in his classic road book. But when the intrepid ex-newspaperman from Pittsburgh started researching Steinbeck’s trip he uncovered a shocking literary scoop. Steinbeck’s iconic nonfiction book was a fraud. “Travels With Charley” was not just full of fiction. It was a deceptive and dishonest account of the great novelist’s actual road trip. Steigerwald made his own road trip exactly 50 years after Steinbeck did. Chasing and fact-checking Steinbeck’s ghost for 11,276 miles and 43 days, meeting hundreds of ordinary Americans, often sleeping in the back of his car in Wal-Mart parking lots, he drove from Maine to California to Texas. Despite the Great Recession and national headlines dripping with gloom and doom, Steigerwald discovered an America along the Steinbeck Highway that was big, empty, rich, safe, clean, prosperous and friendly. He didn’t just reaffirm his faith in America to withstand the long train of abuse from Washington and Wall Street, however. He also exposed the half-century-old myths of “Travels With Charley,” ruffled the PhDs of the country’s top Steinbeck scholars and forced “Charley’s” publisher to finally tell the truth. Steigerwald is a well-traveled journalist and veteran libertarian columnist. With the spirit of a teenage driver, a dogged pursuit of the facts and a refreshing point of view about America proudly located in the heart of Flyover Country not Manhattan, he spins the story of his ride with Steinbeck’s ghost into a provocative, news-making and entertaining American road book.

— Curt Gentry, Author of “Helter Skelter: The True Story of the Manson Murders” (with Vincent Bugliosi)

I wanted … first to express my personal admiration for the job you did. Second to tell you that you became a kind of a journalistic hero in my travel-story about Steinbeck, because you did such fantastic detailed research on the subject, and you did it alone, in sometimes-difficult circumstances.