On Sept. 23, 1960,  John Steinbeck set out alone on the cross-country road trip that he would turn into his best-selling 1962 nonfiction book “Travels With Charley in Search of America.”

Exactly 50 years later, on Sept. 23, 2010, I left Steinbeck’s summer house on the eastern end of Long Island and followed his cold trail as faithfully as possible as a journalist.

Steinbeck’s journey was much tougher and braver than mine.  In 1960 America’s cars were like tanks and its two-lane highways were narrow, thick with traffic and deadly.

Touching the top of Maine and speeding across the top of the USA to Seattle, he drove back to New York City by way of California, Texas and New Orleans. His trip, which included long layovers on the West Coast and in Texas, took about 75 days. He took no notes or photos.

I had originally set out to retrace Steinbeck’s tire tracks as a serious act of journalism. I simply hoped to write a book comparing the America of 1960 he saw on “The Steinbeck Highway” with the America of 2010 I saw.

My circumnavigation of the USA was even more fast and furious than his. As I traveled doglessly for 11,276 miles, I blogged to the Pittsburgh Post-Gazette web site, interviewed dozens of Americans and took thousands of photos. As I drove I wrote about 10 travel stories for the PG’s Sunday paper.

I got lucky and during my research on and off the road I discovered new or “forgotten” information about Steinbeck, his actual trip and the devious editing and publishing of his iconic book.

My discoveries about the major discrepancies between Steinbeck’s actual trip and the one he described in “Charley” got me written up in the New York Times and ultimately changed the way Steinbeck’s classic will be read forever. 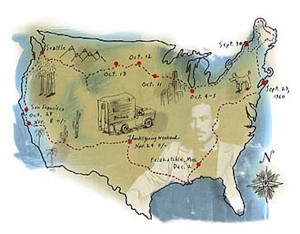 This fine illustration by Stacey Innerst accurately shows where Steinbeck and Charley were on various dates in the fall of 1960.

It’s based on “Travels With Charley,” the unedited  first draft of the book, letters Steinbeck wrote from the road to his wife Elaine and others, biographies of Steinbeck, newspaper articles, interviews and best-guesses.

It’s as accurate as I could make it.