Steinbeck and Charley zip in and out of Potato Country, USA

The ‘Travels With Charley’ Timeline — Day 7 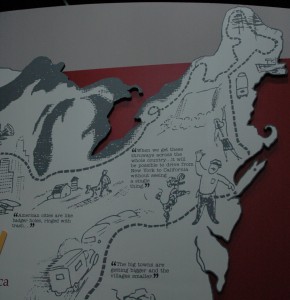 It’s not a very accurate representation of Steinbeck’s foray into New England, but it makes the point — he went north and east before heading west.

From wherever he stopped Wednesday night in northeast Maine, Steinbeck drives north into Aroostook County on U.S. Highway 1. Tracing the U.S.-Canadian border on the south side of the St. Croix River, he reaches the top of Maine, turns south on state Route 11 and plunges deep into the pine wilderness of Maine’s interior. He has to park alone Thursday night somewhere on Route 11 under a concrete bridge in the rain.

Aroostook County is famous for two things – potatoes and its enormous size. It’s one fifth of Maine and bigger than Connecticut and Rhode Island combined. No one traveling north from Calais along the pretty St. Croix River would challenge those facts. I was 929 miles from Steinbeck’s Sag Harbor driveway. Steinbeck drove the same stretch of U.S. Route 1 on Sept. 29, 1960, exactly 50 years ahead of me. He had a weird thing about wanting to touch the top of Maine before heading west, a weird thing he ultimately regretted as he realized how endless and empty the state was. Steinbeck also wanted to see the famed potato fields of Aroostook County, then the foremost spud-producing area of the country.

Maine’s State Route 11, which Steinbeck took south from Fort Kent, is beautiful, empty and devoid of motels, as Steinbeck learned.

After 2,400 miles tracing the edge of the East Coast all the way from Key West, U.S. Highway 1 evaporates without fanfare in the town of Fort Kent. As Steinbeck did, when Route 1 vanished I turned south on state Route 11 for the long haul back to New Hampshire and the way West.

Before I left Fort Kent, I suffered a shock that made me realize what a strange, atypical part of America I had been traveling through. It happened when I saw a black college student on the street. She was the first non-white person I could remember seeing since a pizza shop in downtown Northampton.

The 2010 Census tells the statistical tale. The previous three states I had been in – Vermont, New Hampshire and Maine – might be full of color in the fall, but year round their lilywhite populations don’t look like much of the rest of the country. Each had black populations of about 1 percent. The national percentage was 12.6 percent. The same lack of color would be true for other long stretches of the Steinbeck Highway.