The ‘Travels With Charley’ Timeline — Day 23

Steinbeck left his overnight camping spot near Tarkio midway between Missoula and the Idaho border and rode through little Saltese, Mt., on U.S. 10 into the top of Idaho. It is here where things again get vague and confusing. In “Charley,” Steinbeck says he stopped overnight at an isolated, rundown motel/gas station in the mountains near the Idaho-Washington border and rushed sick Charley to a vet in Spokane the following morning. If Steinbeck did stop in northwest Idaho Saturday night, however, it means he drove only 136 miles that entire day. It’s possible Charley’s sickness really did slow Steinbeck’s pace, as he says in the book. Maybe Charley really did have to see a vet. But given his haste to meet his wife in Seattle, Steinbeck probably spent the night somewhere farther into Washington or drove to Seattle in one 400-mile gulp. Whatever he did on this date, it’s another mystery night with no clues. Day 1 of Steinbeck’s trip was Sept. 23, 1960.

In the thick forests of northwest Montana I pulled off I-90 at the Saltese exit to inspect a well-preserved stretch of Old Highway 10. About half a mile long between its two dead ends, the main street of “The Recreational Capital of the Northwest” was a compact 1960s time warp with about 20 buildings. 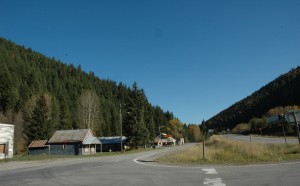 Saltese, Montana, and its 20 buildings still looks a lot like it did when Steinbeck and Charley drove down its main street on the morning of Oct. 15, 1960.

Steinbeck drove down Saltese’s main street on Saturday morning, Oct. 15, 1960. Mangold’s General Store & Motel had a different name then. But the grocery, six pine-paneled motel rooms and the big “M-o-t-e-l” sign were all there by the edge of the road when Steinbeck and Charley motored past. So were the decommissioned state highway maintenance shed, most of the homes and the building housing the Old Montana Bar & Grill.

Terri Mangold has owned and operated the grocery store/motel complex on the bank of the Clark Fork River since 1995. She played local historian for me. When I-90 was poured on top of U.S. 10’s right-of-way in the early 1960s, Saltese’s only street – U.S. 10 – was frozen in time and the town got its own interstate exit.

Saltese, which Mangold said was in the middle of “a winter play land,” had about 60 permanent residents. It gets 20 feet of snow a year and sits under a steep, rugged forest at the foot of the Lookout Run ski resort. Mangold’s all-pine motel rooms were absurdly reasonable – $30 a day and up depending on the size. She said they were usually full year round, thanks to the hunters, fishermen and snowmobilers who stay for a week at a time and spend their days killing big things in the woods.