The ‘Travels With Charley’ Timeline — Day 18

As his wife Elaine flies back to New York, John Steinbeck and Charley set out from Chicago in Rocinante, bound for Seattle by way of Minneapolis, Fargo, Missoula and Spokane. He drives about 220 miles north and sleeps Monday night in his camper at a truck stop on busy U.S. Highway 12 in Mauston, Wisconsin, a town of about  2,100.

Steinbeck wrote a letter that night to his wife, saying, “I am camped in a cornfield behind a truckers service area and coffee shop.” (In “Charley” Steinbeck mentions Charley’s delight in finding piles of manure that had been cleaned out of cattle trucks. Steinbeck also writes that he walked to a valley and looked down at a sea of turkeys being raised for America’s thanksgiving dinners. But both of those events actually happened the next night at a truck stop in Frazee, Minnesota.)

U.S. 12 carried all the truck traffic from Minneapolis to Chicago in 1960. Bob Rose, a retired truck driver, and his wife Dona lived in Mauston in 1960. They said it was almost certain that Steinbeck stopped at Ernie’s Truck Stop and coffee shop, a mile south of town. Ernie’s is now the site of the offices and parking lots of Brenner Tank Services. Day 1 of Steinbeck’s trip was Sept. 23, 1960. 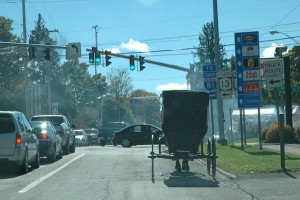 On his way to Chicago, John Steinbeck describes using interstates for the first time on his trip, or possibly his life. Sounding like an old lady stuck in the Indianapolis 500, he was tortured by the speed and flow of the intense truck traffic on “this wide, eventless way called U.S. 90,” aka the New York Thruway, which he took from Buffalo to where it ended at Madison, Ohio.

The thruway and the Indiana Toll Road, which he also used, were some of the earliest pieces of the Interstate Highway System, which in 1960 was 16 percent complete and barely existed outside major population centers. Steinbeck also had a practical reason for wanting to avoid interstates. His journey was “designed for observation,” he said, not self-reflection or daydreaming. He wanted to stay “as much as possible on secondary roads where there was much to see and hear and smell.” 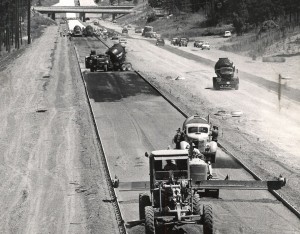 The Interstate Highway System was only about 16 percent finished in 1960.

Steinbeck preferred two-lane highways to interstates. He said he missed being able to stop at fruit stands or local diners. He didn’t mention the small towns, traffic lights, deadly intersections, stop signs, blind turns, business districts, schools, farm tractors, stray dogs and 1,001 other hazards to life and obstacles to efficient car travel. Interstates eliminated 99 percent of them. Steinbeck didn’t realize it, but statistically he was much safer dueling with “trucks as long as freighters” on those four-lane “gashes of concrete and tar” than he had been when he was touring the two-lane roads of New England. But he understood that the quickest way to his wife’s embrace in Chicago was via the Indiana Toll Road, which he was happy to use.