Steinbeck turns back at Niagara Falls

The ‘Travels With Charley’ Timeline — Day 10

Steinbeck writes in “Travels With Charley” that he planned to cross into Canada at Niagara Falls and cut across southern Ontario to Detroit. But a Canadian border guard at the Whirlpool Rapids Bridge warns him U.S. officials might not allow him back in at Detroit because Charley didn’t have the proper inoculations. Steinbeck says he changed his mind and decided to go to Chicago by way of Erie and Toledo. First, he says, he checked into “the grandest auto court” he could find in Buffalo. (Day 1.) 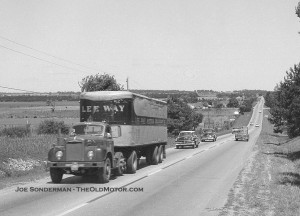 America’s two-lane highways in the 1950s were unsafe and slow.

Steinbeck plotted a beautiful if eccentric route for his circumnavigation of America. He stayed close to rivers, lakes and oceans and as far away from big industrial cities as he could. And he deliberately avoided the nascent interstate system, choosing instead what we and William Least Heat-Moon today romantically call “Blue Highways.”

The roads on the Old Steinbeck Highway – U.S. Routes 5, 2, 1, 11, 20, 12, 10, 101 and 66 – were the two-lane interstates of their day. They were what tourists followed, trucks ran on and the early commerce of travel clung to. The highways cut straight through the downtown hearts of cities like Rochester and Buffalo and became the main streets of small towns from Calais to Amarillo.

Except maybe in the boondocks and deserts, in 1960 there was nothing lonely or quiet or safe about the Blue Highways. They were often worn, bumpy, high-traffic death traps – narrow, shoulder-free, poorly painted and lighted. And they didn’t have 24-hour rest stops every 13 miles where you knew you could fill up on gas, coffee and humanity when you ran low. Today the Blue Highways are much safer and smoother because most of their traffic has shifted to the interstates.