Steinbeck is sickened by racism in New Orleans Route 66, Bound for Amarillo

The Steinbecks feast in Texas

Steinbeck says in “Charley” he spent “three days of namelessness at a beautiful motor hotel” in the middle of Amarillo while the broken front window of his camper shell was repaired. He says Charley was sick and was left with a kind vet for four days. Elaine flew in to rejoin him in her home state of Texas and the pair went to her ex-brother-in-law’s cattle ranch in nearby Clarendon, arriving the day before Thanksgiving. Steinbeck doesn’t say in the book how long he stays at the ranch and never mentions that afterwards the Steinbecks drove 400 miles south to Austin to visit Elaine’s sister until the end of the month.

Where the Steinbecks spent Thanksgiving 1960

Though two buildings were new and many upgrades had been made, it was clearly the place Steinbeck described in “Charley.” The main structure, a long one-story redbrick house, had a big screened-in porch overlooking a trout pond surrounded by trees. The great room had a white-brick fireplace and a high white ceiling with heavy beams. Each of the three bedrooms had a Texas-size bed, its own bathroom and a door to the outside. 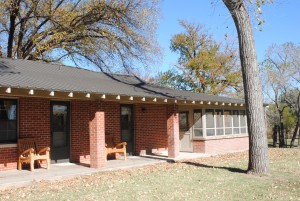 It was like a little motel, only in 1960 the regular guests were members of Texas’ richest cattle families. The showroom of heavy wood outdoor furniture on the covered patios was worth more than my house. Yet, notwithstanding the “Dallas” stereotypes, nothing inside or out was ostentatious or in bad taste, just expensive and heavy.

Enjoying the sun and wind and park-like setting, I tried to imagine what it was like to be a vacationing cattle baron. I couldn’t. My hat was too small. But I didn’t need to imagine anything, since Steinbeck did a thorough job of detailing the cattle-baron lifestyle in “Travels With Charley.” When Steinbeck writes about something he really did on his trip, you can usually tell. Instead of inventing pages of wooden dialogue, he delivers detail. 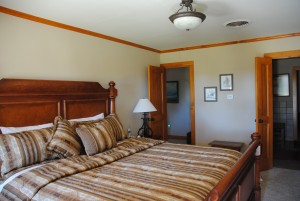 The living room with fireplace in 2010.