Geert Mak’s Steinbeck/”Charley”/USA book is out in English

About 54 years ago today, John Steinbeck finished his failed “Travels With Charley” road trip and dragged his tired and unhappy ass back home to New York City.

When I followed Steinbeck’s trail faithfully in the fall of 2010, I didn’t know it but I was a few days ahead of famed Dutch historian/journalist Geert Mak. I only found out in 2012 that Mak too had had the idea of retracing Steinbeck’s journey as a way to compare the changes that have beset/improved America in the last 50 years.

The English edition of Mak’s “In America: Travels With John Steinbeck” — a fat and footnoted bestseller in Holland — has just come out.

Mak is a self-defined Euro-socialist. Therefore his view of the USA is more pessimistic than mine, which is libertarianly tilted and critical of the current media and the  snooty liberal East Coast view of Flyover Country that Steinbeck also held.

The Independent in London has reviewed  Mak’s book critically but fairly. There’s only one comment — mine.

In America: Travels with John Steinbeck by Geert Mak, book review: A depiction of a country in decline, but was he looking in the right places?

The cultural life of America – film, music, literature – so important in founding and reasserting a national identity, is almost totally ignored by the author

Geert Mak’s retracing of John Steinbeck’s celebrated American journey, Travels with Charley, first appeared in the Netherlands in 2012 under the title Travels Without John: In Search of America.

In this fluid English translation by Liz Waters, the title has been transposed and refocused to In America: Travels with John Steinbeck. In purely commercial terms, one can see why the publisher would want to amplify the Steinbeck link, make him a part of the action. Yet this is a disparity that points to the problem at the heart of this book: it doesn’t quite know exactly what it wants to be.

Steinbeck, at least at first, had a clear idea of both what he was writing, and why he was writing it. In 1960, after an illness had forced him to take stock, he set off from Sag Harbour – with his dog, Charley – journeying through 33 of the 50 American states, to find the country he loved. It’s the last of Steinbeck’s major works, and one that begins in hope and macho endeavour, and ends in downbeat disappointment. It’s a journey riven with great writing, moments of drama and self-reflection; it is also hugely fictionalised, and most probably more imagination than fact.

After 100 years we know Hollywood can’t be trusted with reality. Whatever real or true story screenwriters like Oliver Stone (the imaginative “JFK”) or Danny Strong (the hilariously phony and  awkwardly titled “Lee Michaels’ the Butler”) tell, it’s invariably awful. From “Tortilla Flat” to multiple versions of “Of Mice and Men,” John Steinbeck’s fictional works have supplied the empty idea shops of Hollywood with dramatic fodder for …  78 years!!!!! Steven Spielberg apparently is going through with his threat to remake/ruin “The Grapes of Wrath” in time for the book’s 75th birthday next year. But so far no one in Tinseltown has turned “Travels With Charley” into a road movie. In this excerpt from my boffo literary expose “Dogging Steinbeck,”  I show that Hollywood’s disinterest in dramatizing Steinbeck’s book is a good thing.

Despite its flaws, “Travels With Charley’s” romantic version of searching for America by car has never fallen from the culture’s consciousness. Along with Kerouac’s “On the Road” – its hipper, edgier, happier and openly fictional older brother – it has become a classic American road book. It gave Charles Kuralt his idea for his popular “On the Road” segments for “The CBS Evening News with Walter Cronkite.” But so far, despite a lot of interest, it’s never been turned into a dumb sitcom or bad movie.

Not that Hollywood hasn’t tried. In 1963 no less than Sam Peckinpah wrote an unintentionally hilarious TV script for Warner Brothers’ television division dramatizing “Travels With Charley.” Not surprisingly, it included Steinbeck having two knockdown fistfights. Too horrible even for network TV’s standards, it was never made. 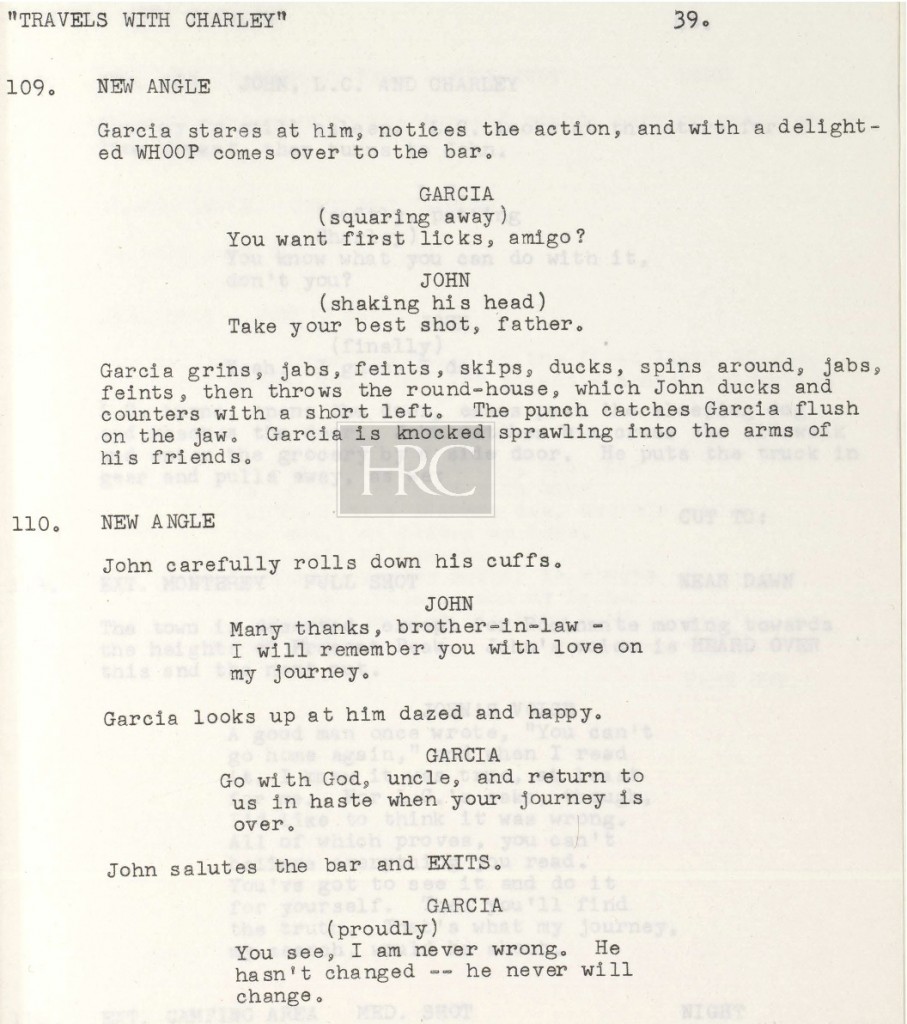 In the early 1990s, Kevin Costner’s production company had an option on “Travels With Charley” with plans to shoot an eight-part miniseries. It died a deserved death. Knowing Hollywood, it wasn’t because Costner’s project was an incredibly stupid idea. It was probably because they couldn’t get Sam Peckinpah to direct.

Finally, somewhere in a file cabinet at HBO sits a less-tortured screenplay of “Travels With Charley.” Written in the early 2000s by Steinbeck’s son Thom, it’s not likely to include any fistfights but it apparently was written as if the book was true.

Unfortunately, in 1968, shortly before John Steinbeck died, “Travels With Charley” did travel to TV Land. Producer Lee Mendelson of “Peanuts” fame turned it into an hour-long “documentary” for NBC. Narrated by Steinbeck’s buddy Hank Fonda, who played an unseen but amply quoted Steinbeck, it was watched by tens of millions of Americans who didn’t want to watch what was on CBS or ABC that night.

An early example of the “docudrama” genre at its worst, it was presented by Mendelson as the true story of Steinbeck’s lonely journey. Skipping the southern leg of Steinbeck’s trip, Mendelson sent out a Rocinante-lookalike to retrace the “Charley” route from Sag Harbor to the top of Fremont Peak.

The dumbest mistake Mendelson made was hiring 15 actors to look into the camera and pretend to be the characters Steinbeck pretended he had met on his trip. Many of the performances are painful, but arguably the worst fictional character was our friend the mythical itinerant Shakespearean actor of Alice, North Dakota.

To heap hokum on top of hokum, Mendelson threw in a few silly cartoon segments and a hideous Rod McCuen song, “Me & Charley,” which was sung over and over by Glen Yarbrough whenever Charley streaked across the grassy fields of America. Mendelson paid $1,000 to rent a stand-in for the dead poodle, who, in a rare and merciful concession to reality, wasn’t made to talk.

The show’s last stop was high atop Fremont Peak, where Fonda delivered Steinbeck’s great lines from the book as the camera swept up the spectacular view. The program ended with Fonda standing next to Rocinante, as Charley sat in the cab. Fonda explains that Steinbeck’s trip didn’t end on Fremont Peak, but continued on through the South where he saw the agony of school integration in New Orleans and talked with Negroes and whites about the violent changes that were occurring.

After Fonda mistakenly says the 11-week trip was “over four months long,” he asks what it was that Steinbeck had learned about America. In a tight close-up, the man who played Tom Joad in the movie of “The Grapes of Wrath” reads two spliced-together passages from “Travels With Charley”:

It would be pleasant to be able to say of my travels with Charley, “I went out to find the truth about my country and I found it.” And then it would be such a simple matter to set down my findings and lean back comfortably with a fine sense of having discovered truths and taught them to my readers. I wish it were that easy …. What I have set down here is true until someone else passes that way and rearranges the world in his own style.

Fonda then looks into the camera and says, “John Steinbeck saw it one way. Charley saw it another way. And now it’s your turn if you so choose to pass that way and rearrange the world as you see it. Goodnight.” Millions of viewers had no reason to doubt that they had just watched the true story of Steinbeck’s journey, which, if Mendelson and NBC were to be believed, was a lonely “four-month” ride around America with a dog in a truck.

Shortly before Steinbeck’s death in late 1968, Mendelson screened his awful rendition of “Travels With Charley” for Steinbeck and Elaine in New York City. “Steinbeck was crying when the lights came on,” Mendelson remembered in a 2003 interview. “I didn’t know if he was crying because he hated it, but he turned to me and said, ‘That’s just the way the trip was.’” Poor Steinbeck. He was probably crying from guilt.

The great Phil Caputo, author of “A Rumor of War” and other fine books, took a sweet 16,000-mile road trip in the fall of 2011 with his trophy wife, trophy dogs and trophy pickup truck with Airstream travel van.

The 80 Americans he met from Key West to Nome are the main attraction in “The Longest Road,” which is being reviewed and promoted everywhere and will be available July 16.

Maybe Caputo would like to join Ethan Casey and me this fall on our West Coast book-promoting tour, which we are calling Two American Road Trips and is further explained at our Facebook Page.

“The Longest Road,” as described on Amazon:

One of America’s most respected writers takes an epic journey across America, Airstream in tow, and asks everyday Americans what unites and divides a country as endlessly diverse as it is large.

Standing on a wind-scoured island off the Alaskan coast, Philip Caputo marveled that its Inupiat Eskimo schoolchildren pledge allegiance to the same flag as the children of Cuban immigrants in Key West, six thousand miles away. And a question began to take shape: How does the United States, peopled by every race on earth, remain united? Caputo resolved that one day he’d drive from the nation’s southernmost point to the northernmost point reachable by road, talking to everyday Americans about their lives and asking how they would answer his question.

So it was that in 2011, in an America more divided than in living memory, Caputo, his wife, and their two English setters made their way in a truck and classic trailer (hereafter known as “Fred” and “Ethel”) from Key West, Florida, to Deadhorse, Alaska, covering 16,000 miles. He spoke to everyone from a West Virginia couple saving souls to a Native American shaman and taco entrepreneur. What he found is a story that will entertain and inspire readers as much as it informs them about the state of today’s United States, the glue that holds us all together, and the conflicts that could cause us to pull apart.

TART is the unofficial acronym of “Two authors, two road trips, two Americas,” a co-venture in travel book promoting and selling that’s being put together by me and my new pal Ethan Casey of Seattle.

Ethan — billed as a liberal and author of “Home Free” — and I — billed as a true-blue libertarian — are going to hit the highway this fall and appear together at libraries and indy bookstores from coast-to-coast.

So far we’re only officially booked into venues in Seattle and Mt. Lebanon, a Pittsburgh suburb.

But more dates are going to come, especially in the Bay Area and Monterey County, aka Steinbeck Country, during late October and early November.

Anyone finding this page knows the pain I’ve caused Steinbeck fans. But here’s a little blurb from the PR department about young Mr. Casey:

In the fall of 2012 Ethan Casey drove clockwise around America during the election season.

The result is “Home Free,” an entertaining and edifying work of personal reporting in the spirit of his previous travel narratives, “Alive and Well in Pakistan” (“Intelligent and compelling” – Mohsin Hamid) and “Bearing the Bruise: A Life Graced by Haiti” (“Heartfelt” – Paul Farmer).

“I’m now turning my attention to another society struggling through a time of confusion, economic and political distress and transition,” says Casey, who’s working hard to finish “Home Free” by fall. “America is susceptible to the same forces and trends as any other country.”