Ray Sprigle  was a superstar newspaperman for the Pittsburgh Post-Gazette whose amazing undercover mission into the Jim Crow South in 1948 has been largely forgotten.

In my Lyons Press book  30 Days a Black Man I retell Sprigle’s great story, which is about the pre-TV civil rights movement, the triumphs and failures of black and white newspapers and the power of one journalist to start a national debate in the media over ending legal segregation. 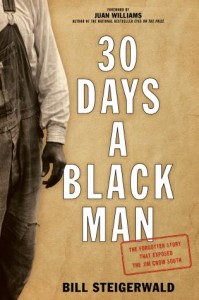 Support your local bookstore or buy many copies online.

Six years before Brown v. Board of Education, seven years before the murder of Emmett Till, and thirteen years before John Howard Griffin’s similar experiment became the bestseller Black Like Me, Sprigle’s intrepid journalism blasted into the American consciousness the grim reality of black lives in the South.

It was my great pleasure — and duty — to elevate Sprigle’s groundbreaking exposé to its rightful place among the seminal events of the early Civil Rights movement.

Paul Theroux, the globe’s top travel writer and author of Deep South, blurbed about the book  this kind way on the back cover:
This is a vivid, well-researched account of a journalistic coup. White Ray Sprigle passing for black in the Jim Crow South—the danger, the narrow escapes, the abuses, the revelations. But it is also a set of portraits: of the brave black men who helped Sprigle fulfill his assignment; a portrait of the Deep South; and a portrait of the United States in the late 1940s.

Steigerwald’s powerful new book … documents Sprigle’s expose and does a masterful job of recreating an America in which de facto and de jure segregation was the rule not just in the former Confederacy but much of the North as well.