Ah, the great power of C-SPAN.

I’m not ready to retire yet.  But before my C-SPAN appearance, my ranking on Amazon’s various Journalism and Travel categories was never higher than No. 4 (which it hit briefly after a rave Weekly Standard review by Sean Macomber).

Brian Lamb and C-SPAN took me to these dizzy heights Monday morning. Staying up there will be tough without help from the Wall Street Journal, the New York Times and Charlie Rose, but being No. 1 in something for even just a little while is kind of fun. 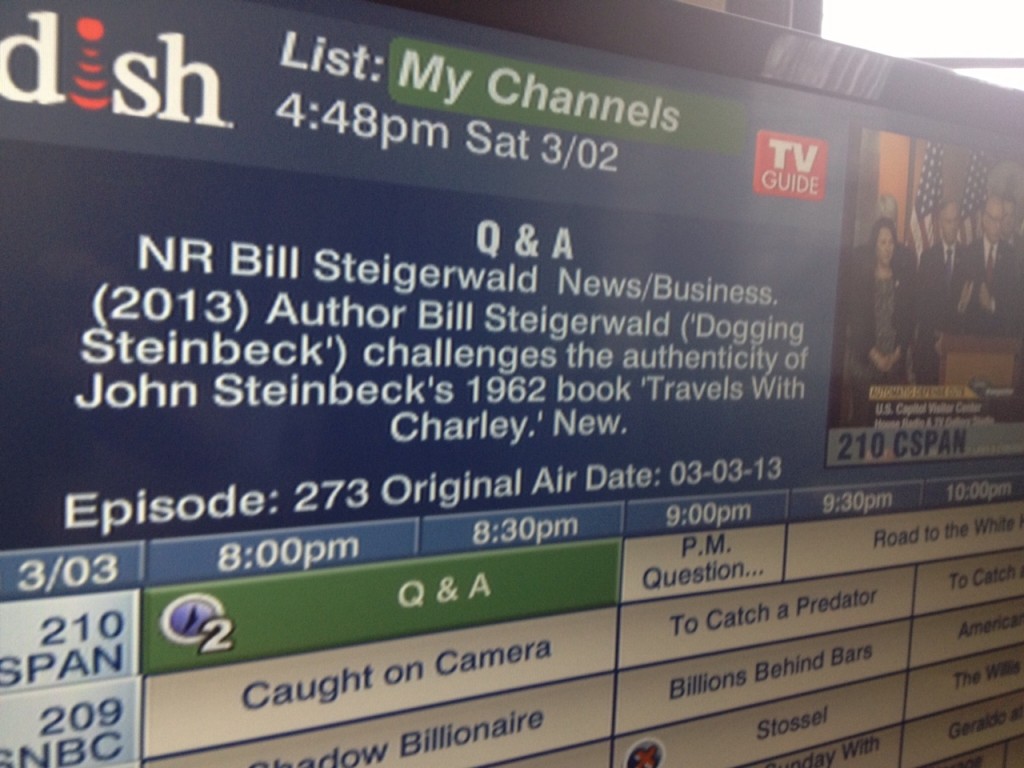 My journalism career is complete.

My interview with the man I like to call “St. Brian” will be displayed for the whole world to see on Lamb’s Sunday night “Q&A” program on CSPAN March 3 at 8 and 11 p.m. ET.

Brian Lamb and CSPAN and I go way back together — or at least I do.

I first spoke to him in 1980 not long after the cable channel was born and began providing American TV watchers with their first taste of real ideological diversity.

I called CSPAN from my apartment in Hollywood USA to ask a question of  the guest, Ed Clark, the 1980 Libertarian Party presidential candidate. Clark couldn’t even buy some decent network TV-news time in those bad old oligopolistic days when the lefty liberals at CBS, ABC, NBC called the shots and set the national political agenda.

A year or two later I met Lamb for about two seconds at a party in L.A. thrown the L.A. Times’ cable TV reporter.

In 2004 I turned the tables on Lamb and interviewed him for my weekly Q&A at the Pittsburgh Tribune-Review.  A year later, on New Year’s Eve, if I recall, I called him on the air during CSPAN’s 25th anniversary show.

Lamb, who’s known for his laconic interviewing style and kindly, unflappable demeanor, was one of the nicest celebrity guys I ever interviewed, and I’ve interviewed hundreds of famous/important people over the years.

Here’s how I set up my Q&A with Lamb, which occurred in December of 2004 and shed light on his motives for starting CSPAN and his deliberate effort to open up America’s cablewaves to more diverse and strident political voices:

Talk about your fair-and-balanced TV.

Thanks to saintly cable pioneer Brian Lamb, C-SPAN has been providing the country with a serious, unbiased and unfiltered look at the widest possible spectrum of political ideas and information for 25 years.

Operating on a puny $45 million annual budget provided by the cable industry, the multimedia empire that Lamb founded and has carefully fathered covers government, the political process, party conventions, debates, seminars and author appearances across the country and now includes three C-SPAN cable-satellite channels, a C-SPAN radio channel and the Web site c-span.org.

After 15 years and reading 801 books, Lamb recently disappointed many faithful C-SPAN viewers by recently ending “Booknotes,” his popular hour-long Sunday program which featured his gentle, quirky interviews with top nonfiction writers. I talked to him from his offices in Washington, D.C.

Q: Any regrets yet about deciding to end “Booknotes”?

A: Sure. The regrets that you have are tied to the fact that so many people seemed to value the information. You hate to give something like that up, because it meant so much to enough people that it kept me going over the years. But, I’m 63, and I want to have some more free time to do exactly what I want to do. I was really tied to reading a book all the time, so from that perspective, no, I’m ready to change my habits.

Q: Why did you start C-SPAN?

A: It’s not what most people think it was. My interest in starting C-SPAN (in 1979) was that I thought that three commercial television networks controlling what we saw was unfortunate. I was angry about it, as a matter of fact. I kept saying to myself, “Why are we watching only three television networks? And the same newscast every night? And the same lead story and the same breaks for commercials?” When I first got in it, I said, “We need more information.” It was that simple. I didn’t feel strongly about covering the House of Representatives. That just turned out to be the vehicle with which we were able to start this place.

A: There are several levels there. First, its greatest value, I think, is that you can see your elected officials spending your money. Secondly, officials can talk back to their constituents, which they never were able to do before. They had to talk back through the filter. And third, it’s a national conversation, 24 hours a day, seven days a week, about the big issues that confront the country. And it’s not controlled by entertainment values. It’s not controlled by the ratings you can get by talking about Scott Peterson ad infinitum. I find that story to be of no journalistic value, and we don’t have to worry about that. It’s an unusual place, and there’s no place like it. It was luck that got us there, because if you tried to start something like this today, you couldn’t.

Q: Do you consider yourself a journalist?

A: Absolutely. I’m a journalist first and foremost, and I believe strongly in the profession.

Q: How do you define your politics?

A: I don’t. I’ve never been a member of a party. I’ve worked for both Republicans and Democrats in the first nine years of my adult life as I was in the service and worked around this town for both Nixon and Johnson. The thing on my political side that I worry about the most and think about the most that needs the most correction is the way we spend our money. It’s not very accountable right now. We don’t know how our money is being spent.

In the job we do here at C-SPAN, I really don’t care who wins. We’ve set it up so we stay out of the contest. We don’t support anybody internally. We talk all the time about politics, but we don’t give anybody any impression as to how we are voting. It works very well for us. The attitude that we have inside here — that I find often is not present in some of the other organizations that I have been around over the years — is that we never have any interest in excluding a point of view. I’ve heard people say, “Oh, we don’t want to hear that point of view, that doesn’t need to be heard.” That’s what our whole mission is about here at C-SPAN. We put on everybody. We go from the socialists to the libertarians. From the Ralph Naders to the Green Party to the Christian right and communist left. It’s all over the lot. It doesn’t matter what it is. We just don’t ever say, “Oh, we don’t think our audience ought to hear that.”

Q: At your National Press Club talk the other night you said you thought the American people really sought more “choice and freedom” in their lives. Is there a secret Brian Lamb who is really politically opinionated?

A: Yes. I have strong opinions about openness. I’m a small “d” democrat. I basically said it at that press club speech that I feel very strongly in the First Amendment and that it’s absolute and it’s the only thing that really keeps us free, because I’ve watched politicians hoard information and control information, and control our access to information. It’s the only chance we have of being different than other places. There are democracies all over the world. Lots of countries have democracies. There are very few that have the strong First Amendment that we have. I guess I feel so strongly that people who don’t understand the First Amendment or the value of it would miss it if their side or their ox is being gored.

Q: Is C-SPAN an organization that can live on without you?

A: I can walk out of the door today, and you’ll never notice the difference. People who follow the details of networks like ours think that I matter. But most of the people in this country don’t know who I am, don’t care who I am, and do not watch C-SPAN for me. They watch it for the events.

Q: What have you learned about the American people by creating and working on C-SPAN all these years?

A: Well, I guess, first of all, I’ve learned that some of the people in the body politic — it’s probably 10 percent of the country — are very aware of what is going on and are very smart about politics and can ask as good a question as anybody in our profession.

Secondly, I’ve learned — and I suppose I should have known this — that the politician loves to control what we hear and see, loves to control his own image, which is human nature. But I didn’t realize to what degree they would go to do that.

Third, people in this country, more than anything else, want choice. They want choice in soaps and they want choice in television, and they’re going to get what they want eventually. That’s really what’s been going on for the last 30 years — in television the public has demanded more and more. And finally, after being protected for many, many years by the government, the television industry has had to offer choice. And that’s the best thing that’s happened.

But then I also get nasty ad hominem attacks like this one from a disturbed person named Heidi:

“It would appear that you are bitter hack who is spending your retirement trying to justify your failures by breaking down the successes of those who came before you. Attempting to expose the fraudulence of other authors is a testament to the truth of your character. You are a man who is wasting the opportunity to write on far reaching criticism of books whose meaning are out of your reach. Even if your assertions are true, it matters not as Steinbeck and Capote were gifted writers. You, Sir, are a fraud and you spend your days running from that truth. I’ll take Steinbeck’s lies over your bullshit any day.”

If turnabout is fair play, I get to make some wild-assed assumptions about Heidi’s troubled psyche.

I’d guess that  Heidi, who clearly doesn’t understand the difference between journalism and fiction, apparently was so unhappy to learn that one of her favorite childhood books was full of shit that she decided to take out her unhappiness on little old me.

I’m sure she didn’t read my book or take the time to find out how I came to discover Steinbeck’s literary fraud.