The English version of Geert Mak’s Steinbeck/America book, “In America: Travels With John Steinbeck,” is the hit of the UK’s book pages. 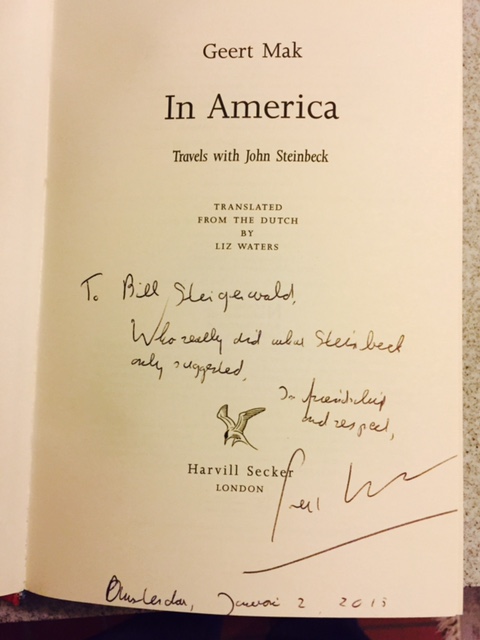 Geert Mak sent me an English version of his 2012 book, which has been updated. The inscription reads: To Bill Steigerwald, Who really did what Steinbeck only suggested.”

It’s been reviewed  fairly favorably in the last two weeks by the bookies at the Guardian newspaper, the Spectator magazine and now the Herald, the Scottish paper that is the longest running national newspaper in the world.

Mak’s book — an impressive combination history book and travel book aimed at informing his fellow Dutch — is more than 500 pages and covers a lot of American ground.

A 2013 bestseller in Holland, it was hooked around the idea of following John Steinbeck’s “Travels With Charley” route exactly 50 years later.

An ocean apart, we had the same book idea — to show how much America had changed from 1960 to 2010 by retracing Steinbeck’s “Charley” trip and comparing what we saw on the road with what he did.

Mak mentions me about a dozen times in his book and repeatedly praises me for my drive-by journalism and for digging up and exposing the fictions and lies Steinbeck filled “Charley” with.

It was/is a great honor to be praised by a great journalist like him.

We didn’t meet on the Old Steinbeck Highway in the fall of 2010, but we’ve met since. (He flew from New York City to Pittsburgh last year just to meet me and buy me lunch.)
We were only a day or two apart on the road as he and his wife drove behind me in their rented Jeep.

Mak slept in motels and behaved like a mature mid-60s author and journalist while I slept in my car and drove like a mad teenager.

Mak is a major Dutch media figure, best-selling historian and journalist who had a sweet book deal. I, being a nobody, could not get a publisher and so I had to travel on my own dime and time.

As I’ve said often, I had a blast chasing Steinbeck’s ghost, exposing his ethical lapses and dueling with the Steinbeck scholars. I would not rewind the tape of the last five years to do it any other way.

I’ll get my payoff when Kevin Costner options my book so he can play Steinbeck, the great author who at age 58 bit off more than he could chew when he set out to rediscover America.

Mak and I are not political soul mates, though we are both against the war on drugs, the wars in the Middle East and poor city planning.

He is a self-defined “euro-socialist” and therefore what we say is right and wrong about the Americas we saw in our books differs by about 180-degrees when it comes to economic policy, the wage gap and the efficacy  of government welfare programs.

Someday I hope we will have a debate in Holland, where Mak jokes he has made Bill Steigerwald a household name.